Alum and Fenwick Board of Trustee member Peter Andruszkiewicz '75 has remained busy since his retirement. In an email to a number of his fellow alums, Peter A recently shared ...

As you may know, I've spent quite a bit of time since my retirement learning to turn wood on a lathe. In addition I’ve also had the amazing opportunity and gift of collaborating with three of the most special women in my life... Danielle, my mother in law, Margo, and our daughter, Grace, to create a variety of wood and stained glass pieces from bowls to charcuterie boards, wine bottle stoppers, pens, boxes, and decorative wall hangings. We're excited to share our work and have recently launched a website (www.claryvillewoodworks.com) as well as Facebook / Instagram accounts.

Peter A and members of his family

Tim, Lost 52 Project Founder, whose mission along with the team of explorers, is dedicated to preserving and telling the story of WWII Submarines and Submariners.

Recently, Tim and his team found a Navy Submarine, Missing for 75 Years off the coast of Okinawa. The U.S.S. Grayback beneath 1,400 feet of water was discovered after realizing that a mistranslated Japanese war record had pointed searchers in the wrong direction. Read below the recently published NY Times article reagrding this incredible discovery.

Click here to watch a mini documentary of Tim's work. 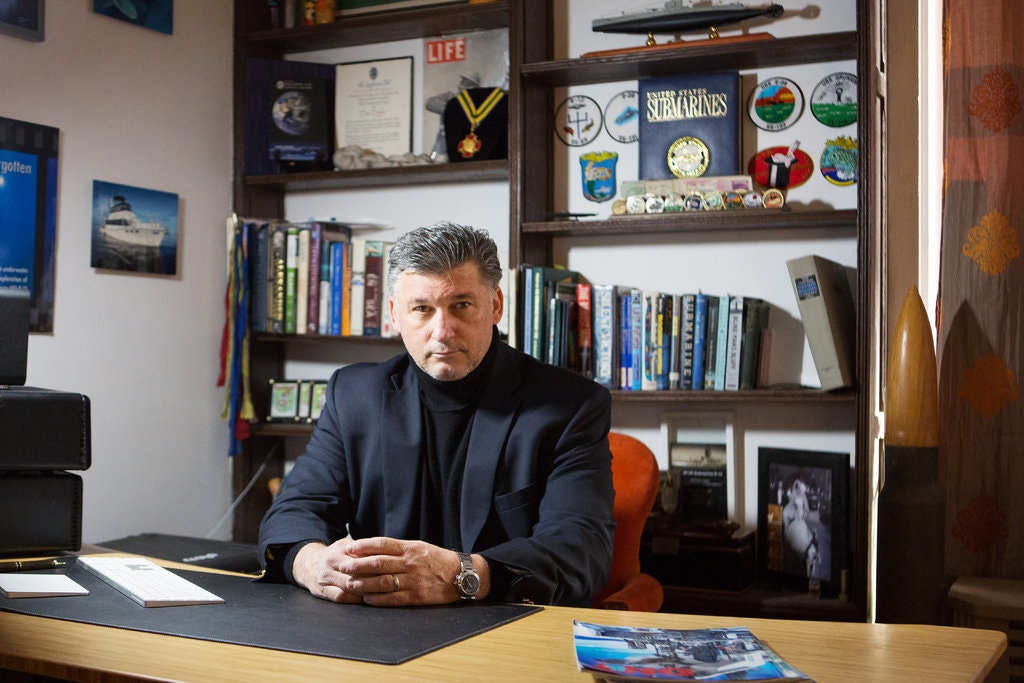 Tim Taylor, an undersea explorer, set up the Lost 52 Project with the goal of finding the wrecks of every American submarine lost in World War II. Credit...Mary Inhea Kang for The New York Times

A 75-year-old mystery has been solved, and the families of 80 American sailors lost at sea will now have closure: the U.S.S. Grayback has finally been found.

It was hidden from discovery all this time by a single errant digit. Click to continue reading...

Congratulations to Stefano Fabiano’21 for being named a Future Star for the Boston Lax All Underclassman Team. Stefano has 127 career points in two seasons in a Crusader uniform. He is a two time Catholic Central League All Star, 2019 Salem News All Star, and was also a wide receiver on the 2019 CCL Football Championship team. #wearefenwick

Click here to update your information and stay in the loop! 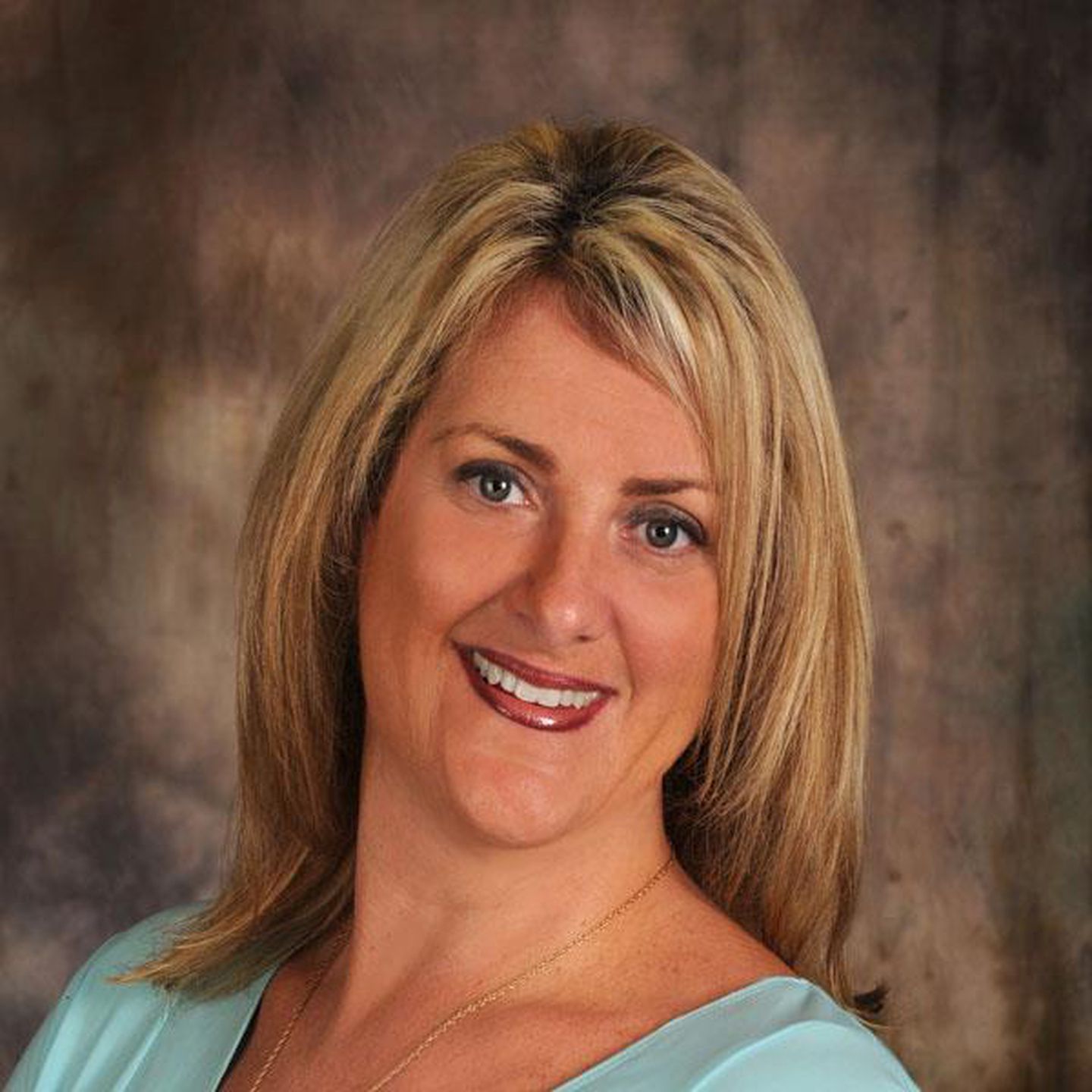 “I was honored to work with Cara every day and proud to call her my friend,” Bettencourt wrote in a Facebook post. “Her selfless devotion to our students, faculty, and staff, combined with her lifelong passion for education, lifted the entire Peabody school community.”

Bettencourt did not say how or when Murtagh died. Murtagh, 44, led the nearly 6,000-student school district since July 2018, after serving six years as assistant superintendent. On Wednesday, she posted a message on the School Department’s website “Wishing our students, staff, and families a very Happy & Healthy Thanksgiving!” News of her death stunned current and former colleagues. Herb Levine, a former interim Peabody superintendent who mentored Murtagh, called her “. . . not only a close work partner, but a close personal friend.” “Cara had an unbelievable work ethic, unmatched really, but there was so much more to Cara,” said Levine, a retired Salem school superintendent. “Kids would come up to her with a glisten in their eyes to say ‘Hi’ to her. They adored her because she made sure they all had a fair and even chance to succeed."

Murtagh hailed from a well-known family active in education and civic life in Peabody. Her late father, Jack, was a teacher and 37-year principal of the Kiley Brothers Memorial School. Another relative was also a longtime teacher in the district, Levine said.

“She was part of the fabric of the city,” he said. “She can’t be replaced.” Mary Henry, president of the Peabody teachers’ union, recalled having “such a nice conversation with her this past Wednesday.” Henry said she had known Murtagh for about 15 years. “She was always available for us,” she said. “It’s a devastating loss for the community.” Murtagh made an effort to know everyone in the district, including educators, students, and parents, she said. “I’d mention a teacher’s name, and she always knew exactly who they were,” Henry said. “With so many educators and students — it was remarkable.” Mark Whiting, the manager of Northshore Mall in Peabody, worked with Murtagh for 20 years through the Peabody Learning Academy, an alternative high school located inside the mall. “She was an amazing educator, an amazing leader, and just a tremendous collaborative spirit,” Whiting said. “She will be so terribly missed. ”Murtagh had planned to attend a wake on Friday for 13-year-old Jackson Frechette, a Peabody middle school student who died after being hit by a car on Nov. 19, Whiting said. “That’s just the kind [person] that she was,” he said, adding he admired her devotion to students and teachers in the schools. “She had a great sense of humor [and] just exuded positivity. ”Murtagh graduated from Emmanuel College in 1997 with a degree in education and history, and earned a graduate degree in educational leadership and administration in 2000, according to the college’s website. Murtagh started teaching in 1997 at St. John the Baptist School in Peabody. The Catholic school mourned her death in a Facebook post. “We were fortunate to have Cara as a first-grade teacher in 1997/1998 before she moved on to the Peabody school system administration,” the school wrote. “This is a great loss for our city. Our prayers are with the entire Murtagh family.”

Jamie O'Brien '74 was recently lauded at the 101st North Shore Chamber of Commerce's Annual Dinner. Recognized for his outstanding efforts as the General Manager of the Topsfield Fair, Jamie was one of eight individuals to receive the distinction of "North Shore Distinguished Leader". 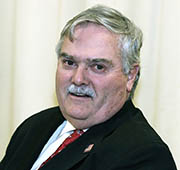 Per the Chamber "This premier dinner meeting celebrates the many accomplishments of 2019 and sets the standard for a successful 2020. Attended by over 500 of the North Shore's finest, the dinner meeting serves as an opportunity to honor those that have made significant contributions to enhance our quality of life, make the North Shore a better place to live, work and do business."

ARTHUR MAKAR '68 INDUCTED TO THE PLAYERS HALL OF FAME. 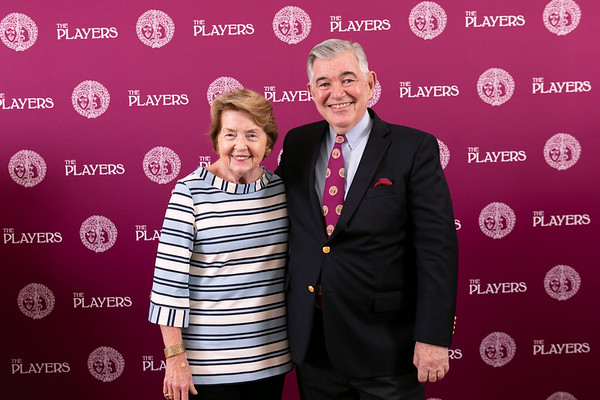 Congratulations to former Fenwick Board President, Arthur Makar, Class of 1968, on his recent induction to The Players Hall of Fame. Arthur is President/Chairman Emeritus of the New York City club, founded by Edwin Booth in 1888 to bring together theatre and industry.

A portrait of Arthur by Michael Shane Neal is now now part of The Players permanent art collection.

Fenwick is never far from Arthur’s heart, here he is pictured with Elaine Schneider, his senior math teacher at Fenwick, a close friend for decades and guest at the Hall of Fame Dinner.

Click here to view the induction program and portrait image. 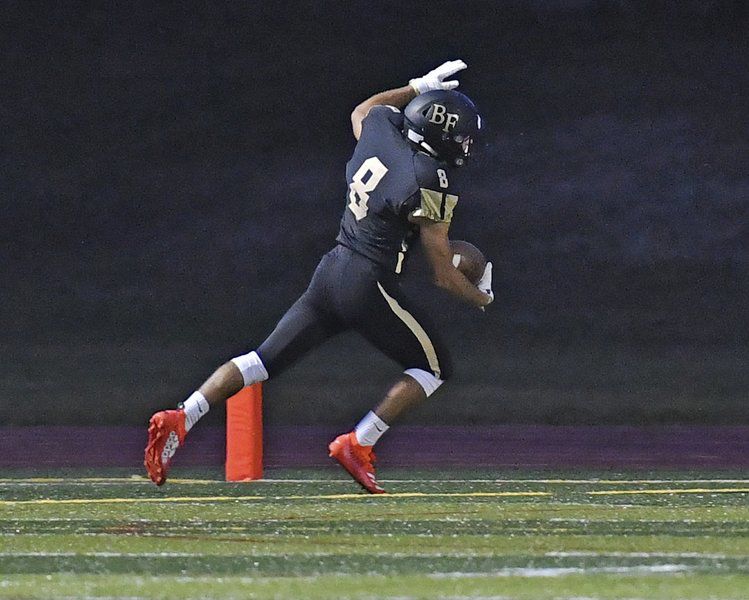 PEABODY — It was a special night for Bishop Fenwick football, recording the program’s 350th in its 57 year history. The players weren’t aware of it until coach Dave Woods informed them after they picked up their third straight win of the young season, 40-6 over Wilmington.(click to read more).

September 20th On Campus Alumni Event:
Alumni who gathered to meet Fenwick's new administrators Tom Nunan and Cecilia Marquez were treated to an additional highlight as they witnessed the 350th win of the Football Program (which began in 1962) with the Crusaders win over Wilmington, 40 - 6! It was a great night under the lights on Donaldson Field with special guest visitor, Mr. Ralph LeDuc. Alums from each decade enjoyed the festivities which included a warm welcome from Vice Principal Jim Grocki '96.

Bishop Fenwick's 2nd Graduating Class gathered on September 18, 2019 to celebrate their 55th Reunion. In a a beautiful room overlooking the water at the Danversport, over 50 graduates gathered for a lovely luncheon and great company. "Coach" LeDuc and Fenwick's new president, Tom Nunan, joined in the special celebration. Check back for additional photos! 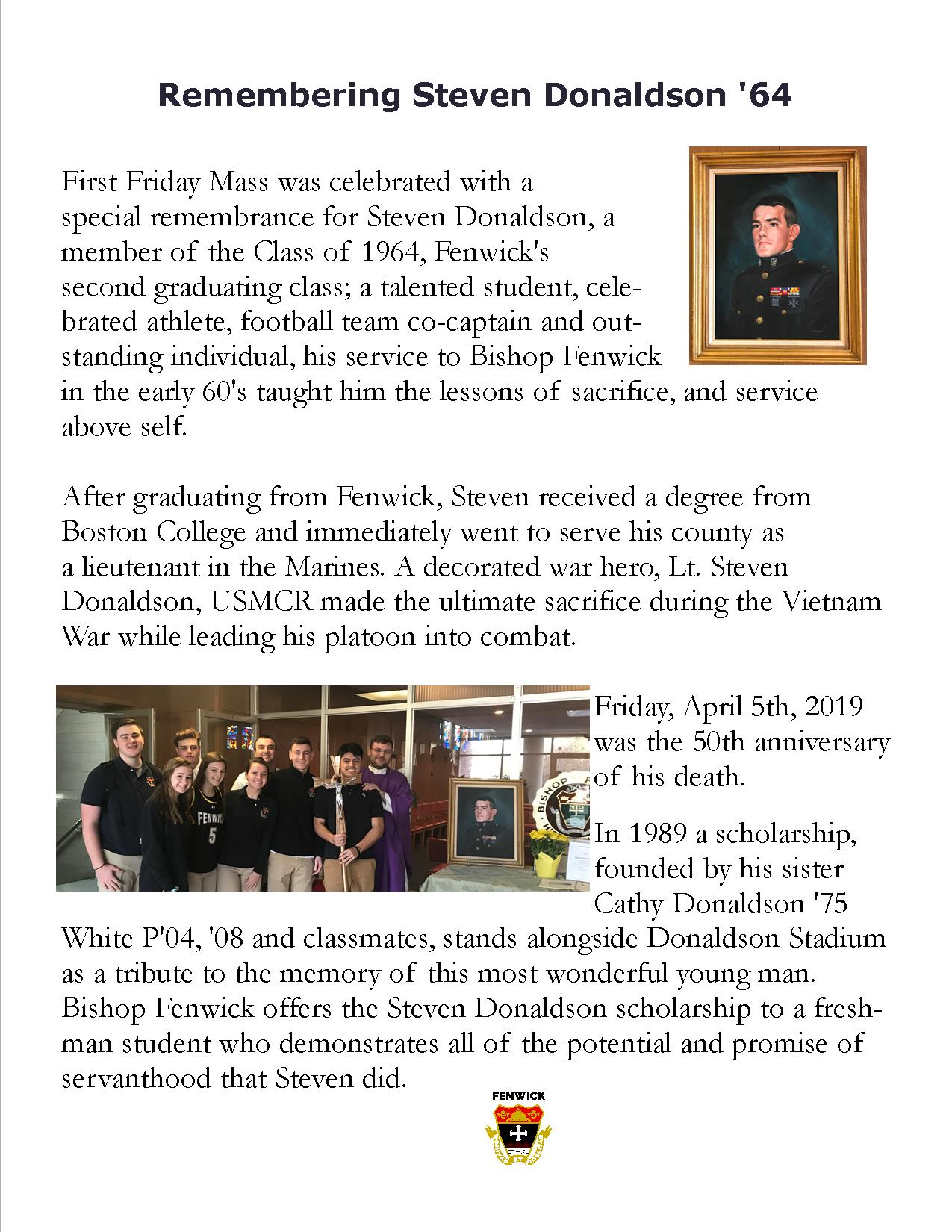 Greg Tremblay ’75 made his television debut in August 8 on ESPN as Plate Umpire for the 2019 East Region Tournament on the road to the Little League World Series. 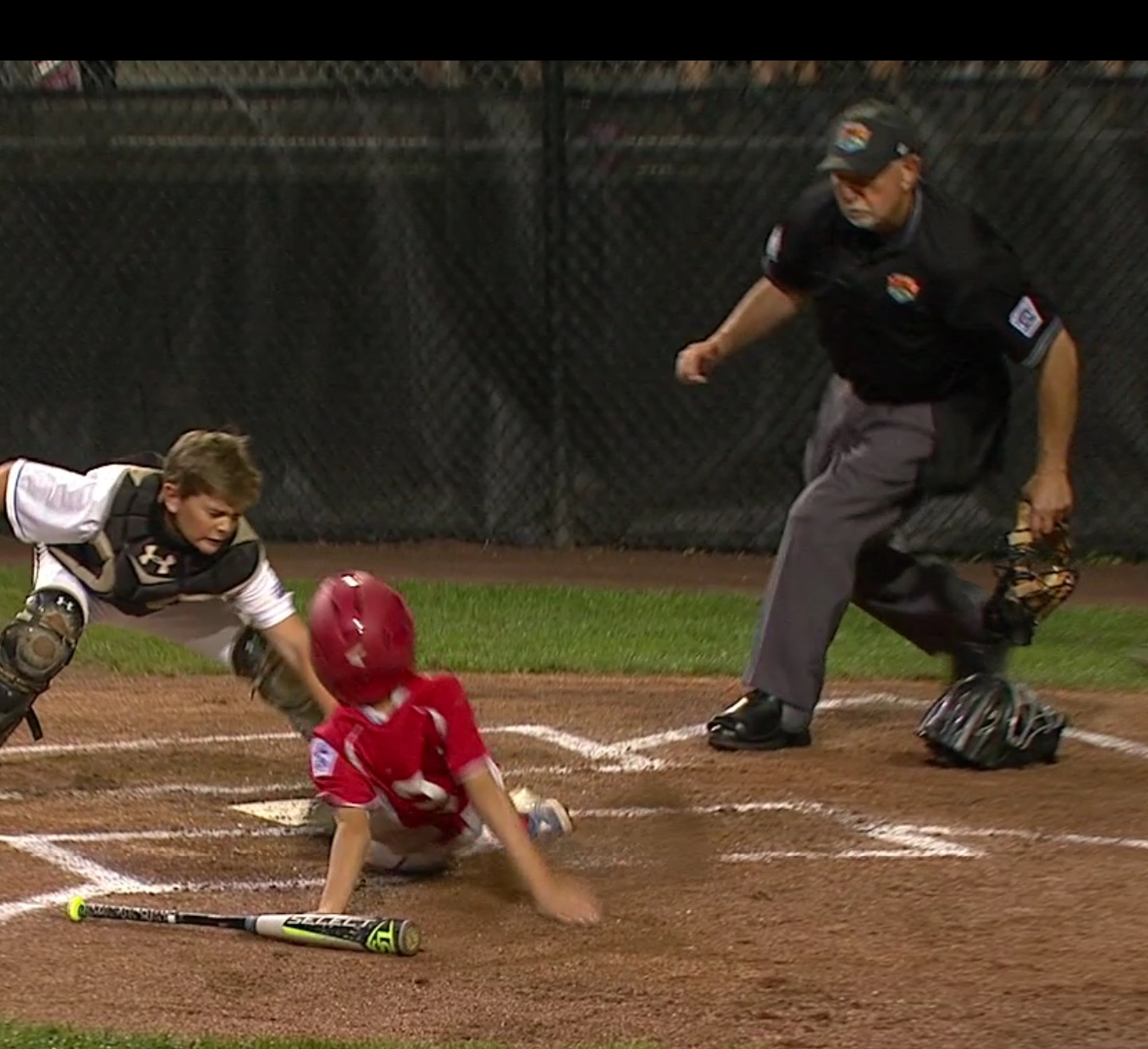 Greg, a referee for over 15 years, began officiating in Little League after being involved in youth sports as a coach when his children Greg, Jr., Jennifer ‘08 and Mary Margaret were younger.

Greg came to the attention of the East Region of Little League based upon a recommendation from local administrators. The selection process to become a Regional umpire is lengthy and rigorous. For the 2019 season there were over 250 referee recommendations; Greg was among the 12 selected for this once-in-a-lifetime opportunity.

When not umpiring, Greg, who received his BS in Business Administration from Merrimack before becoming a CPA, is with Mahoney Fiorentino & Company in Wakefield.

Greg resides in Danvers with his wife Jane and remains active in the Fenwick community. 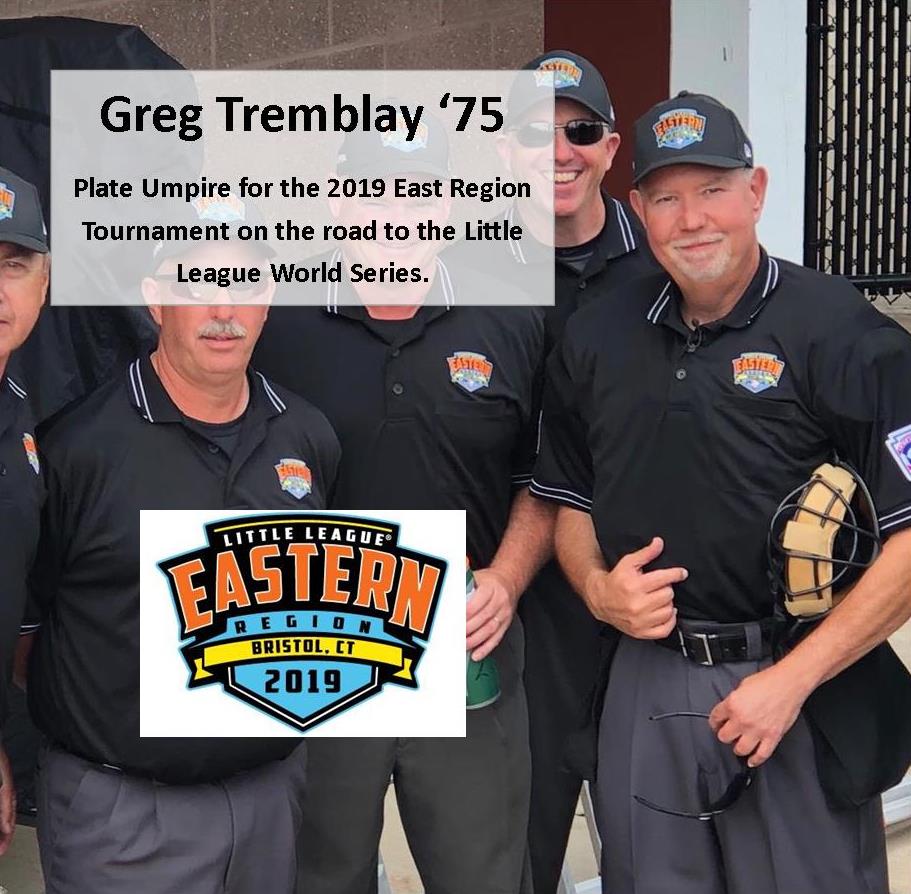 Congratulations to Zach Nardone '11 named as one of Salem News 2018-19 Winter Sports Coaches of the Year. 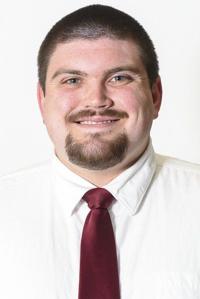 The Crusader boys (and girls) had a terrific season in Nardone’s first year as indoor coach. He began working with the current crop of seniors as an assistant coach four years ago.

“This is the first class I’ve had the pleasure of coaching through all four years. It’s amazing to see their growth during that time and how it paid off this season with a Tri-County League (Division 2) championship,” said the 26-year old Stoneham resident.. “Going to invitational meets, such as the Dartmouth Relays, East Coast Invite and states, having our team excel at these meets among high caliber competition shows the effort put in over the last four years.

The combined boys and girls team scored 151 points for Fenwick, which was 25 more than the second place squad to easily win the TCL championship.

A history teacher, Nardone said assistant coaches Steve Czarnecki, Jocelyn Testa, Michael Ford and Pat Cahill, who worked with the team on a day-to-day basis, were instrumental in the team’s success.

Congratulations to Debra Lee Surface who was recently inducted into 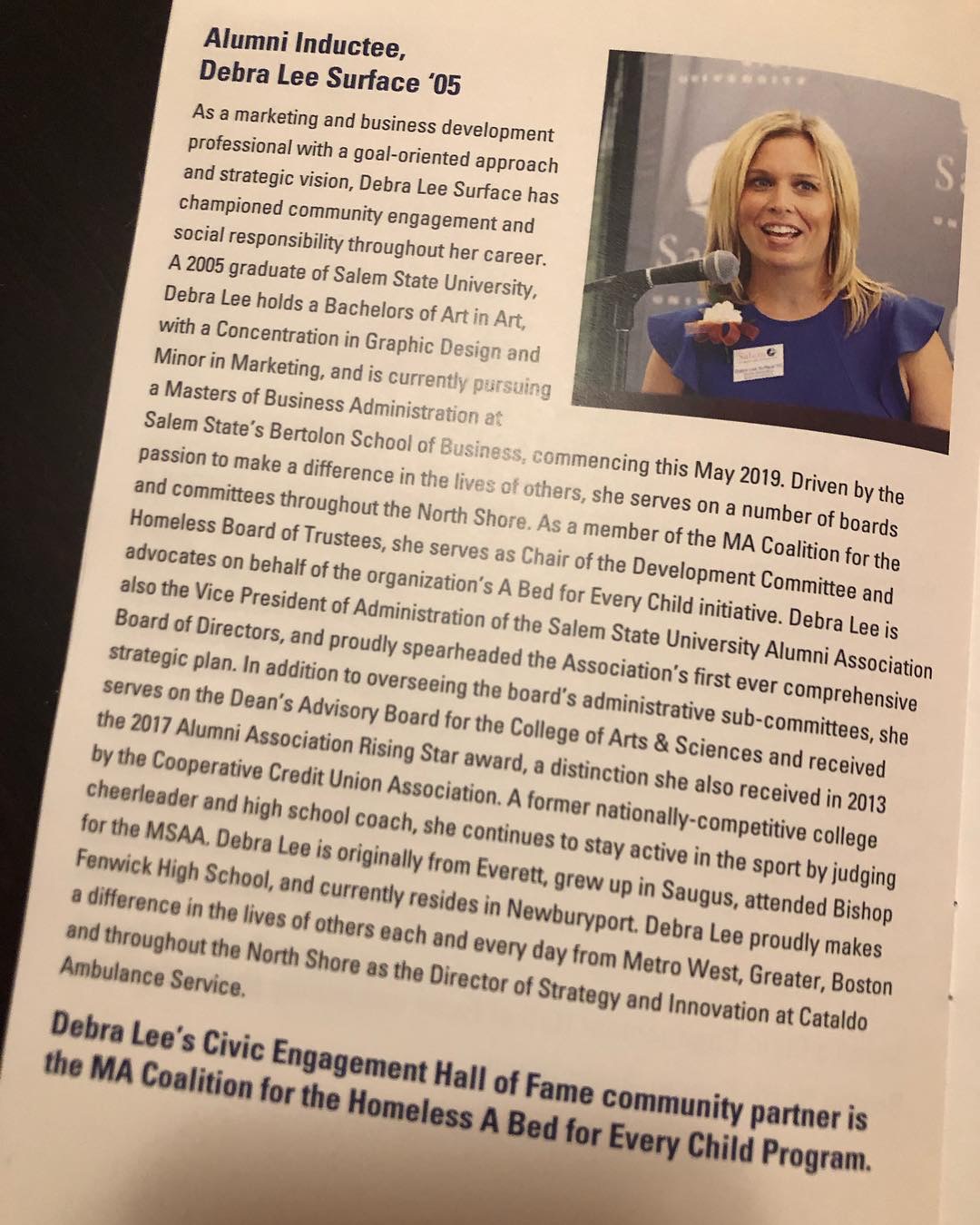 Salem State's Civic Engagement Hall of Fame. In her Acceptance Speech she thanked Bishop Fenwick High School as "without the foundation that her education has provided, she would not be able to give back in the way that she does, to provide the same opportunity for others."

Salem State allowed Debra Lee to opportunity to sponsor a community partner; her selection of A Bed for Every Child to allows this worthwhile organization to be the beneficiary of her Hall of Fame donation. Thanks to the generosity of Salem State University, a child from the City of Everett will be receiving a bed of their own. In Debra Lee’s speech she shared, "with this a child will be receiving their own bed, in hopes to get a good night’s sleep so that they can excel in the classroom and create their own path to success for their future.". 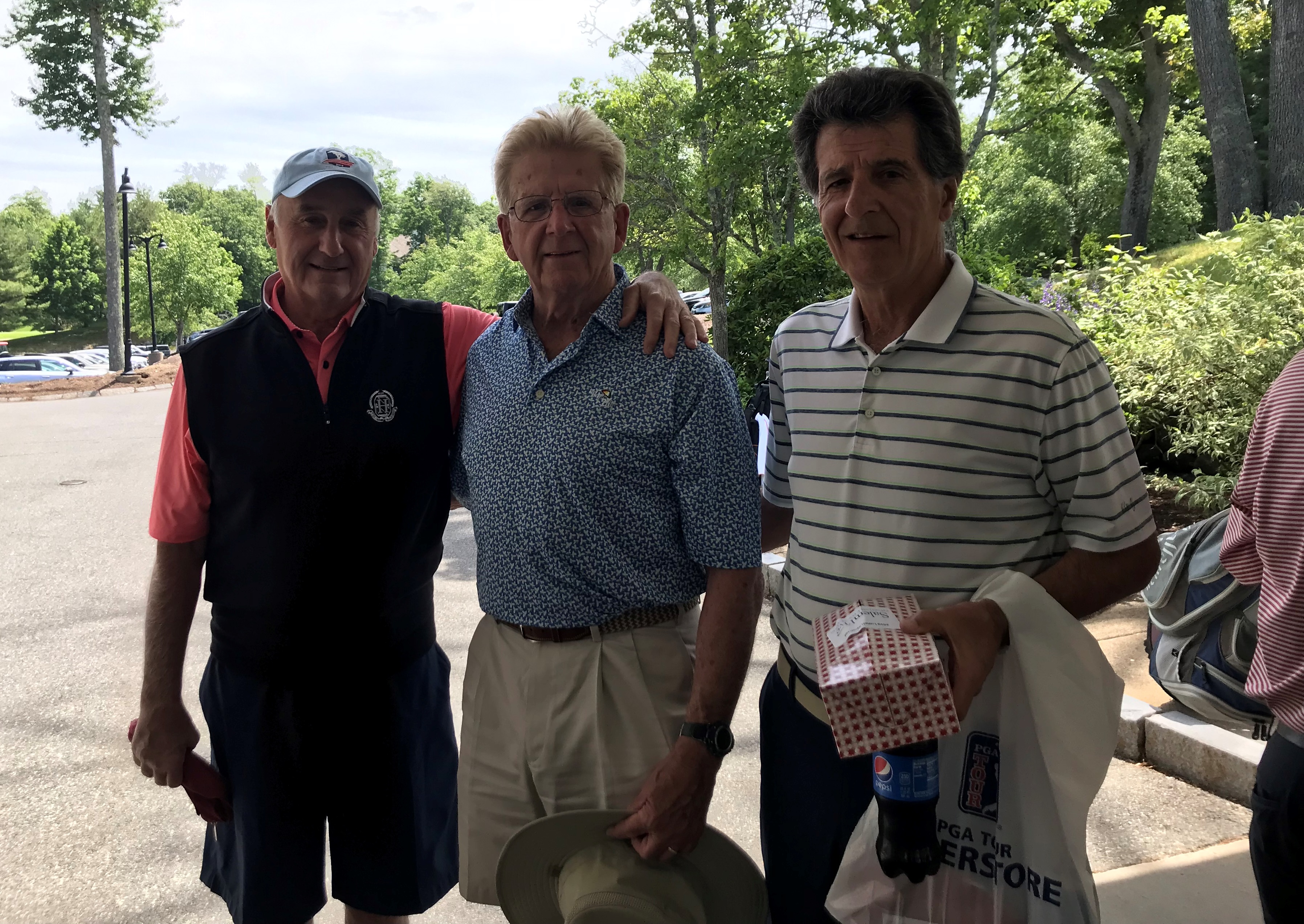 Congratulations!
Legacy Graduates from the Class of 2019 !

It is with great sadness we share with the Fenwick Family the pastoral notice of Sr. Catherine Reidy, SND, former Vice Principal and Science Faculty member. 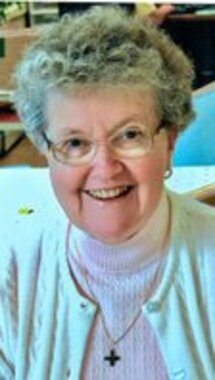 Join with fellow Crusaders at Gillette Stadium on Saturday, December 7 for the Division 6 Super Bowl when we face off against the Ashland Clockers! 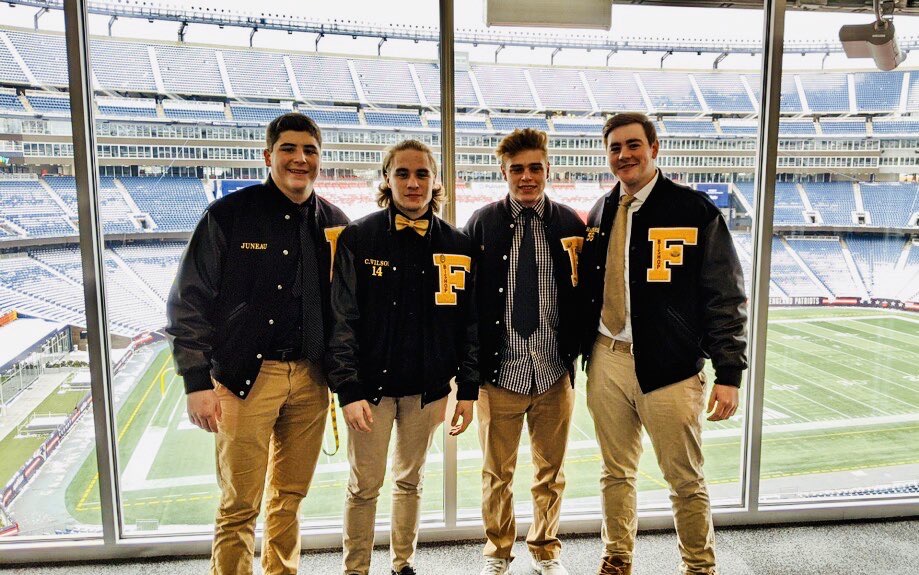 Tickets: Tickets may purchased at the gate or through the Ticketmaster website (indicate the December 7th game) at https://www.ticketmaster.com/miaa-high-school-football-tickets/artist/1801121

Tickets are $17 each (children 5 and under are free with a paid adult), general admission seating and give you access to all games that day. Please note that there is a clear bag policy at Gillette Stadium (click here for the Stadium's policies) 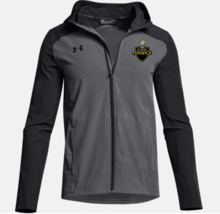 Fenwick is proud to be an official Under Armour School. Click here to visit the Fenwick Fan store.

Click on the icon below to visit the Old School Apparel on-line store for Fenwick spirit wear..